A recent walk down the hallways at Covenant Christian School was a bit startling.  Long rolls of white paper, about three feet wide, had been laid out and students, armed with computers, rulers, drawing pencils and other art supplies, were stationed on and alongside the paper.  These rolls, each more than 25 feet in length, were a puzzle.  What were these sixth grade students doing and how could it possibly be linked to the school’s curriculum?

Observers soon discovered that these lengthy sections of paper were a culminating element to an integral unit.  The integral unit was focused on understanding a root cause of one of our nation’s greatest ecological challenges.  The students were studying the Dust Bowl of the 1930s and coming to a greater understanding of that event within the context of the Great Depression.

An integral approach to curriculum and instruction reflects the cohesive nature of all of God’s creation through thematic units of study organized around important ideas.  It minimizes the artificial separation of subjects and, instead, shows the real connections between them.

The sixth grade students, working in teams, gathered around the rolls of paper and began to collaborate, measure and sketch.  Using photos from the Internet and their research and math skills, the students began creating beautiful full-scale drawings of plants (including root systems) found in their school’s prairie.

But why prairie plants?  What do they have to do with the Dust Bowl?

Over the course of the school year, Covenant’s sixth grade class studies the historical time period 1850 to the present.  As they approached the 1930s, students came to understand the conditions leading to the Great Depression, with a special focus on the impact of the Dust Bowl.

During their study of the Dust Bowl students learned that vast swaths of the native prairie in the Southern Plains had been plowed under in order to allow for the planting of commercial crops.  These crops were not suitable for the land as their short root systems could not hold the soil or maintain moisture during drought.

To further their understanding, in Covenant School’s Outdoor Learning Lab students conducted an experiment that illustrated the ecological difficulties that come with converting native prairie to commercial cropland.  They began by placing sand in two containers.  In one they placed pipe cleaners in rows to illustrate short root commercial crops.  In the second, they placed longer pipe cleaners close together to illustrate deep rooted prairie plants.  They then used a hair dryer and observed the impact of wind on dry soils.

In order to provide a depth and richness to student learning, Covenant seeks to provide opportunities to make student learning experiential.  When finished, these sixth graders had produced lovely, full-scale drawings of prairie plants found in Covenant School’s prairie.  They arrived at this project finale through a process that brought a number of subjects and learning objectives together.  Behind these plant drawings is a demonstration of integral curriculum.  History, math, science, writing, drawing, art, interpersonal skills, research, and more all came together in a manner consistent with the school’s educational goals.

Listen to this blog post as a podcast, read by John Roberts. 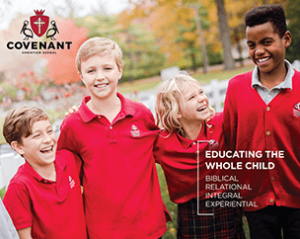